Here is an interesting account on two types of leadership styles in identical circumstances! 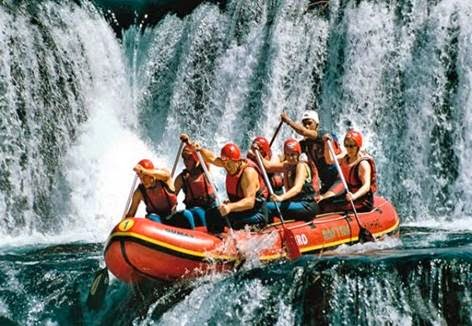 By good fortune, I was able to raft down the Motu River in New Zealand twice during the last year. The magnificent four-day journey traverses one of the last wilderness areas in the North Island.

The first expedition was led by "Buzz", an American guide with a great deal of rafting experience and many stories to tell of mighty rivers such as the Colorado. With a leader like Buzz, there was no reason to fear any of the great rapids on the Motu.

The first half day, in the gentle upper reaches, was spent developing teamwork and co-ordination. Strokes had to be mastered, and the discipline of following commands without question was essential. In the boiling fury of a rapid, there would be no room for any mistake. When Buzz bellowed above the roar of the water, an instant reaction was essential.

We mastered the Motu. In every rapid we fought against the river and we overcame it. The screamed commands of Buzz were matched only by the fury of our paddles, as we took the raft exactly where Buzz wanted it to go.

At the end of the journey, there was a great feeling of triumph. We had won. We proved that we were superior. We knew that we could do it. We felt powerful and good. The mystery and majesty of the Motu had been overcome.

The second time I went down the Motu,.the experience I had gained should have been invaluable, but the guide on this journey was a very softly spoken Kiwi. It seemed that it would not even be possible to hear his voice above the noise of the rapids.

As we approached the first rapid, he never even raised his voice. He did not attempt to take command of us or the river. Gently and quietly he felt the mood of the river and watched every little whirlpool. There was no drama and no shouting. There was no contest to be won. He loved the river.

We sped through each rapid with grace and beauty and, after a day, the river had become our friend, not our enemy. The quiet Kiwi was not our leader, but only the person whose sensitivity was more developed than our own. Laughter replaced the tension of achievement.

Soon the quiet Kiwi was able to lean back and let all of us take turns as leader. A quiet nod was enough to draw attention to the things our lack of experience prevented us from seeing. If we made a mistake, then we laughed and it was the next person's turn.

We began to penetrate the mystery of the Motu. Now, like the quiet Kiwi, we listened to the river and we looked carefully for all those things we had not even noticed the first time.

At the end of the journey, we had overcome nothing except ourselves. We did not want to leave behind our friend, the river. There was no contest, and so nothing had been won. Rather we had become one with the river.

It remains difficult to believe that the external circumstances of the two journeys were similar. The difference was in an attitude and a frame of mind. At the end of the journey, it seemed that there could be no other way. Given the opportunity to choose a leader, everyone would have chosen someone like Buzz. At the end of the second journey, we had glimpsed a very different vision and we felt humble - and intensely happy.

Rohan
Posted by Rohan Singal at 14:58 No comments: