Can giver behaviour sabotage a relationship?

Picture this: Girish as a child was a very obedient boy. He always did what mom asked, kept his cupboard clean, no complaints from school. He was the blue-eyed boy of his teachers as he did homework on time and played no pranks ever.

In college, he attended all classes and made copious notes. The notes earned him peer approval when he shared them with those who missed the classes.

All his actions were governed by an intense need to please everyone, seek approval, be accepted, included and appreciated. He had a fear of being rejected or left alone.

He found it very difficult to say NO, as he could not handle NO. He attempted to fulfil everyone’s request even at the cost of his own happiness and priorities. He could not ask for help instead silently hoping that others would guess what he wants and offer him that.

In professional life, he worked hard, pursued excellence and was a do-gooder. He was reasonably popular but wanted more. When his juniors failed, he would complete their job instead of holding them accountable as he did not want to hurt their feelings.

To please, appease or seek peace, he would avoid all confrontations. Artificial harmony was given a preference over constructive conflict. Whenever voices were raised in an argument around him, he would consider it his responsibility to pour water over fire and restore peace at the earliest.

In discussions, he would avoid stating contrary opinions. When someone else stated an opinion matching with his own, he would quickly second it. Else Girish would keep silent and later berate himself “Why did I not speak up?”. Due to unexpressed disagreement, he would remain resentful of his inability to assert and jealous of others who asserted authority.

We call this behaviour style – Doormat Giver (DG). Inability to say no, giving more than you get, sacrificing self, not speaking up when you have a contrary opinion… 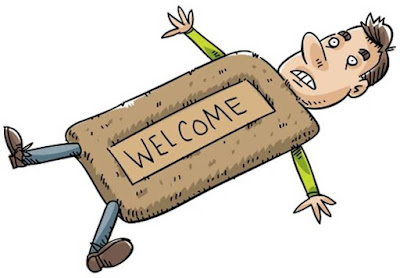 I can relate a lot to this behaviour as my own life journey has been similar. In one of my business ventures I had 2 assertive partners. When they expressed their opinion, I would agree, despite my internal disagreement.

I equated disagreement = hurting / upsetting them = ruining the relationship

The company never grew since we were a misaligned team with my superficial acceptance of my partners’ views. I blamed it on them but when I look back, I feel my DG behaviour tantamounted to sabotage. If my partners knew my internal disagreement, they would find another rationale to convince me or an alternate approach to which all could agree. The team counted on my agreement, while I internally checked out. I ended up spoiling the very relationship which I was protecting by not speaking my mind.

It is critical for self or any team to tune “Giver” behaviour from Doormat Giver to a Contributor who includes own needs.

1.  Recognising that DG behaviour leads to burnout for self, diluted ownership of others, being taken for granted, ultimately resentment and finally failure of the project / relationship.

2.  Shift focus outside self. Change the objective of the ‘Giving’ behaviour from ‘My inability to say no’ to ‘progress of the overall project’

3.  Differentiate between requests & order. Request implies a choice to say yes or no. Stop equating No to rejection. Choosing ‘NO’ (by either party) is not a reflection of who you are or the quality of your relationship.

Warm regards,
Rohan
Posted by Rohan Singal at 14:50 No comments: